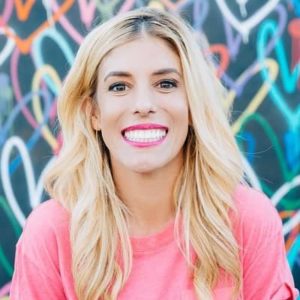 Rebecaa Zamolo is a 38-year-old female. She was born in Martinez, California, on September 28, 1984. Cathy is her mother’s name, and Paul is her father’s. Jennifer, Monica, Lissa, and Michael are her four siblings, and she is the oldest of them all. Rebecca Lynn Zamolo is her given name.

She also began gymnastic training when she was nine years old. Moving on to her educational background, she graduated from the University of California with a bachelor’s degree in Communication and Sports Management. Rebecca is a citizen of the United States.

Rebecca Zamolo is a YouTuber from the United States. She is best known for her appearances on The Real Game Master network series with her husband Matt Yoakum, also known as Matt Slays online. The couple also has a joint YouTube channel called Matt and Rebecca, where they upload their videos together.

She has finished all of her hard work throughout the years. She began training as a competitive gymnast at the age of nine and went on to become a professional cheerleader for the San Jose Sabercats. Prior to her YouTube stardom, she worked as a sports announcer for Gaucho News at the University of California, Santa Barbara, and trained at The Second City improvement club. 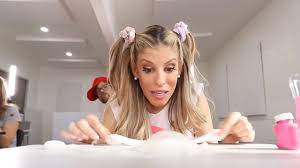 She has also worked on commercials and as a voice actress for a number of television series and films. She debuted as a recurrent performer on Craig Ferguson’s Late Late Show in 2010. She has even competed at the Elite level as a gymnast for over ten years. With her exceptional performance throughout her social media career, she has captivated the hearts of millions of fans.

Her TikTok account has more than 14 million followers and about 1.6 billion likes as of 2020. Her TikTok videos are entertaining to watch. She also has two YouTube accounts of her own. Her self-titled YouTube channel now has over 9.58 million followers. Her adventure vlogs on YouTube include 24-hour challenges and massive DIY projects. Along with Matt & Rebecca, she is also a member of the Real Game Master Network and the PawZam Dogs channel.

All of the YouTube videos she uploads to her YouTube channel are primarily for amusement reasons, with material that is family-friendly and appropriate for all viewers. Similarly, Rebecca and her husband Matt must answer clues in this escape room in real-life problems in The Real Game Master. The YouTuber now has more than 9.58 million followers and about 2.52 billion cumulative views.

A combination of her 24 hour challenges, gymnastics, slime, and recreating musicals are among her most popular and greatest videos. lys, 3 a.m., wedding flash mobs, and amusing pranks Some of her channel’s most popular YouTube videos include “Escaping ABANDONED Prison in TOP SECRET Location! (Hidden Mystery Box Found),” “24 Hours Inside a Dollhouse Escape Room in Real Life! (Game Master vs Quadrant Battle Royale),” and “DONT Push the Wrong MYSTERY BOX into the Water! (you decide).”

Similarly, she and her spouse maintain a combined YouTube channel called Matt and Rebecca, which has more than 4.83 million followers. The Halloween Pancake Art Challenge, gymnastics challenges, pranks, and more are included in this selection of Matt and Rebecca’s greatest films. She is also well-known on other social media sites, such as Instagram. She has around 2.8 million followers on her account and has shared 1,523 posts so far. Rebecca Zamolo is a well-known social media celebrity who has amassed a substantial quantity of money from her social media profession. As a result, her predicted net worth in 2022 is roughly $12 million.

She also brings luck to others by being active on social media sites such as YouTube, TikTok, Instagram, and others. She also makes money via brand sponsorships, sponsored marketing, and events, among other things.

When it comes to Rebecca Zamolo’s marital status, she is a married lady. She married her spouse, Matt Yoakum, on May 17, 2014. She is now based in Los Angeles, California. Matt Yoakum, best known on YouTube as Matt Slays, is a musician. In her videos, the duo can be seen participating in challenges and even performing in comedies and parodies.

They are a fun-loving couple who will be celebrating their sixth wedding anniversary in 2020. Furthermore, they are content with each other and show no signs of divorcing in the near future. Aside from that, the Youtuber has not been involved in any controversies or controversial behavior. She has, however, set aside unpleasant rumors and remarks in favor of positive.

Rebecca Zamolo stands at a height of 5 feet 5 inches (1.65 m) according to her body measurements. She is around 55 kilograms in weight. In addition, she has dark brown eyes and blonde hair. She may be found on several social media sites such as Instagram, Twitter, YouTube, and Facebook.