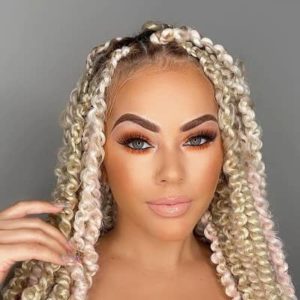 Ms. Jacky Oh is a multi-talented American woman. Ms. Jacky Oh is a television personality, actress, model, businesswoman, and online sensation. She is most known for her role on the MTV program “Wild ‘N Out.”

Ms. Jacky Oh is a 30-year-old woman who was born on November 3, 1990. She was born and raised in Oakland, California.

Her educational background includes a degree from the University of California, Berkeley. Her past educational background, on the other hand, is unclear. She also hasn’t revealed any details about her personal life. The identities and occupations of her parents, siblings, and other family members are all unknown on the internet.

Nonetheless, there is evidence that she is of mixed race and of Brazilian ancestry. As a result of her blended ethnicity. She does, however, identify as a black woman. Furthermore, she grew up knowing more about her father’s side of the family than her mother’s, which may explain why she feels more at ease identifying as black. She also said that she received her nickname from a college acquaintance who nicknamed her “Jacky Oh” all the time. As a result, contrary to common belief, “Oh” is not her last name. Ms. Jacky Oh is a professional actress, model, businesswoman, television personality, and online sensation. Her performances on the MTV program Wild ‘N Out made her famous. She also has more than 866,000 Instagram followers, 20,000 Twitter followers, and more than 30,000 Vine followers before the program was shut down.

Similarly, she and Lauren Wood have both worked at Wild ‘N Out. In August 2019, she went skydiving with Brittany Raymond. Jacky’s Instagram account @msjackyoh has over 866k followers as of early November 2020. Her YouTube channel, which she began while pregnant for the first time, has over 630,000 subscribers. She launched the J Nova Collection lip gloss brand in October 2019, which she describes as “ultra-glossy lip glosses.

” During an interview with JaGurl TV during the debut of the Blac Chyna TV program The Real Blac Chyna, she revealed what inspired her to pursue a career in cosmetics. “People were continually asking me about my cosmetics, particularly my lip gloss,” she said, “so I decided to take advantage of it.

” She sells velour shorts, lashes, lip liners, and other attractive products on her website, jnovacollection.com, in addition to lip glosses. She even has coasters with a cartoon image of her and her daughter, Nova, on them. As of November 2020, she is estimated to have a net worth of about 191,000 dollars.

Ms. Jacky Oh has a boyfriend, rapper DcYoungFly. Nova and Nala are the couple’s two daughters. Their first daughter, Nova, was born in 2016, and their second daughter, Nala, was born in August 2020. DcYoungFly is a rapper who also appears on MTV’s Wild ‘n Out with Nick Cannon. The couple met during a season of Wild ‘n Out but chose to date after the show ended. Before choosing to have Nova, the two dated for almost two years. Nova is also known as the first Wild ‘n Out baby. In regards to their second daughter Nala, Jacky announced her second pregnancy on March 13, 2020, at a professional pregnancy photograph with her family.

Following the news, she has been posting more images of her pregnancy as well as her infant on Instagram. Similarly, she announced the birth of her second kid on Instagram on August 7, 2020. She expressed herself as follows: “Is it possible to be cute while having contractions? NALA’HONEY HAS ARRIVED! The first episode of my Labor & Delivery is now available! In the bio, there is a link “.. She also posted a picture of herself nursing Nala. She also urged every woman to nurse since it is the most incredible bonding experience a mother can have with her child, and the health advantages of nursing are unrivaled.

Unfortunately, no confirmed information about Ms. Jacky Oh’s physical measurements is available. This contains her height, weight, chest, waist, and hip measurements, as well as her dress and shoe sizes. In addition, she has dark brown hair and hazel eyes.

Similarly, she uses the handle @msjackyoh on Instagram, where she had 813 post shares and 870k followers at the time of writing this profile. In addition, she maintains a personal Facebook account. She started her Facebook on November 19, 2013, and it now has more than 106k followers. In addition, on April 2, 2009, she launched her YouTube account. As of November 2020, this channel has over 64 million views and over 704K subscribers. For further information, we may reach out to her at [email protected]