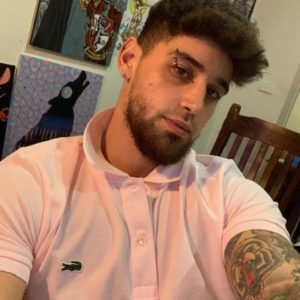 Jai Brooks is a key member of the ‘Janoskians,’ a popular YouTube group.

Jaidon Domenic Matthew Brooks is Jai Brooks’ full name. He was born in Melbourne, Australia, on May 3, 1995.

He is now 24 years old and was born under the sign of Taurus. Luke Brooks, his twin brother, and Beau Brooks, his older brother, are his siblings.

He was also born two minutes after Luke, his twin brother. His mother, Gina Brooks, is not only his greatest supporter and admirer, but also his manager.

She assists him in scheduling tours and business meetings, as well as accompanying him to these events. Throughout his education, he was a great student. His siblings and he dropped out of high school to focus on their YouTube careers.

He has a good sense of style, a hat fixation, and a wicked grin. His friends taunt him about his name all the time, but he laughs it off. He is incredibly sporty and fearlessly accepts dares. He is also one of the most dedicated members of the group, since even when the group isn’t producing videos, he is editing or improving them.

He enjoys being in shape and publishes images of himself on Instagram on a regular basis. With all of the attention he has received, it is difficult for him to remain out of the spotlight, as he is constantly scrutinized by the public and the media.

He loves music and refers to it as “soul medication.” Usher, Justin Bieber, Michael Jackson, and Bruno Mars are among his favorite R&B performers. He enjoys sports and video games. He is also a foodie, with lasagna and tacos among his favorites. His favorite movie is ‘Step Brothers,’ and he likes the color gray. He dislikes spiders, and gets the chills if he ever sees a spider!

Since September 2011, Jai has been a member of a YouTube comedy group named the Janoskians, which includes Luke Brooks, Beau Brooks, and Daniel Sahyounie. ‘Janoskians’ also stands for ‘Just Another Name Of Silly Kids In Another Country Skip.’ In 2011, they released their debut video. He and his band also appeared in a video by Faydee, a well-known Australian singer. 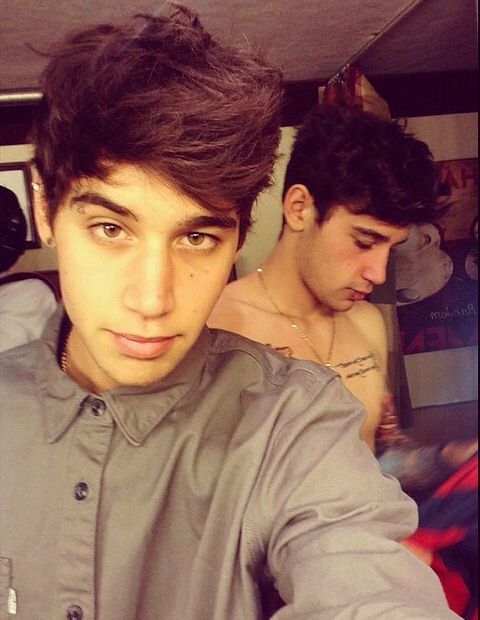 When he and his twin were eight years old, they appeared in a Japanese commercial. However, their spontaneous public pranks have garnered the most attention and millions of views, with their humorous parodies being the most popular.

He is now a member of many YouTube channels. He and his twin brother, Luke, host his second channel, ‘TwinTalkTime.’ The channel has amassed tens of thousands of followers. He is also a singer and composer, in addition to his other interests.

His band, the ‘Janoskians,’ has released a number of songs after securing a deal with Sony Music in 2012. ‘Would U Love Me?’ was their EP published in 2015. ‘Set This World on Fire,’ ‘Real Girl Eats Cake,’ ‘That’s What She Said,’ and others are among their popular tracks.

They also attended the Nickelodeon Kids Choice Awards, which were held for the 28th time. They have their own clothing brand named ‘Dirty Pig Clothing’ as a young entrepreneur.

Jai Brooks and his twin brother Luke began a rivalry in July 2012 to see who could gain Ariana Grande’s attention. He sent her a tweet and made her a video explaining why she should date him. The brothers then created the #JaiVsLukeForAriana hashtag, which quickly became popular on Twitter.

Joan Grande, Ariana’s mother, followed the hashtag and began watching Janoskian videos on YouTube. She thought the lads were hilarious, so she showed Ariana the videos and asked her to comment to one of them.

Because she felt Luke wasn’t being honest, Ariana sent him her phone number over Twitter. They began exchanging a lot of tweets. By texting and video chatting every day, he and Ariana came to know one other quite well.

They started dating on October 7, 2012, and on that day, they tweeted that they loved one other. He traveled out to visit Ariana, and on December 30, 2012, they finally met in person for the first time. They kissed immediately soon as Ariana emerged.

Frankie, Ariana’s brother, shared a video of him and Ariana’s first encounter on YouTube, in which he stumbled as he entered the room. This video, however, was a hoax, and they had met the day before. For the following two weeks, he remained in New York and spent all of his time with Ariana. On January 11, he flew back to Australia. There’s also a video of them kissing at the airport and saying their goodbyes.

He paid Ariana a surprise visit on the shoot of her music video for “The Way” in February. Despite the fact that the kiss was totally directed, Mac Miller and Ariana kissed in the video. Around that time, they temporarily split up, and many fans assumed it was due of the kiss.

He, on the other hand, stated he wasn’t offended and that he realized it was all for the sake of the video. They reconciled a few weeks later, claiming the separation was due to long distance. Ariana and his connection remained strong for the following five months.

He traveled to America often to meet Ariana, with whom he spent a lot of time. Both of them shared photos of themselves with each other on Instagram and Twitter, expressing their love for one another. They traveled to Disneyland together, and on his 18th birthday, Ariana leased him a sloth called Lola. Ariana surprised him on stage during one of his concerts, and he paid her a visit on the set of her “Baby I” music video, where photos of them hugging and kissing can be found.

Ariana Grande said in early August that she will be releasing a song called “Almost Is Never Enough,” which would feature English artist Nathan Sykes.

They spent an increasing amount of time together while they recorded the music video and performed the song on several occasions. He shared a photo on Instagram on August 6 to commemorate his ten-month anniversary with Ariana. The caption was as follows:

“This child has a special place in my heart. There aren’t many long-distance relationships that work out, but ours does. We are not only each other’s boyfriends and girlfriends, but also best friends. Even though we live on opposite sides of the globe, we are still deeply in love with one other.

I am the luckiest man in the planet, and I have really discovered a one-of-a-kind. I’ve had my heart set on you for a long time, and I’m honored to be a part of your life.

Jariana seemed to be be going strong, but Ariana stated that she and him had split up a week later. Ariana later disclosed in an interview with Complex that he had broken up with her through a text message on the opening night of The Listening Sessions, shortly before she was due to perform.

When the music video for “Almost Is Never Enough” was released, several fans speculated that Ariana and Nathan were dating.

They didn’t directly deny it, instead stating that they were young and figuring things out, but that if anything came up, they would inform their fans. The rumors became louder over the following month, with Nathan and Ariana throwing clues all over the place.

In late September, they officially announced their connection. He accused Ariana of cheating on him with Nathan on October 7, 2013, which was meant to be their one-year anniversary. He wrote a TwitLonger with the first few lines as follows: “Yes, I was deceived. Yes, it stinks.

Yes, I was abandoned in favor of another guy.” Ariana has rejected the claims, calling them “totally untrue, upsetting, and surprising,” but she wants to move on and forget about them. He was just exploiting her to achieve his “fifteen minutes of fame,” she alleged.

For the remainder of the year, there was no trace of him and Ariana conversing. Ariana and Nathan, on the other hand, dated until December before calling it quits.

Many signs of him and Ariana getting back together surfaced in early 2014. On Twitter and Instagram, they re-followed one other, and Ariana also followed his brother. On March 24, 2014, Ariana posted an Instagram video in which many fans claimed to hear him laughing.

They were often tweeting love emojis at the same moment, and they were indirectly tweeting each other. Ariana said in an interview on April 29, 2014 that she loves a bad boy, someone who is funny, and has a lot of tattoos. He satisfies all of these criteria.

She went on to say that she attempted for a short time to date a decent guy but that it didn’t work out. Most likely, this is referring to Nathan Sykes. Ariana and he were photographed kissing on May 1, 2014, after Ariana performed at the iHeartRadio Music Awards, confirming their connection.

They both posted on Instagram the next day, within forty minutes of each other, that they were listening to Elvis Presley. Although they were not as open about their relationship as they had been in the past, Ariana continued to indirectly tweet love emojis to him and they continued to indirectly tweet love emojis to each other. Ariana shared photos of him holding her and kissing her on the set of the music video for “Break Free” on Instagram.

Ariana’s grandfather becomes seriously ill in July 2014. She spent the whole month of July in his home state of Florida. Ariana’s family had already arrived, and her friends had flown down to console her and spend time with her. On July 22, 2014, her granddad died away.

She was quite close to him, and his death was very difficult for her to bear. This, together with information from a close friend of Ariana’s, verified that he and Ariana had split up.

He did not come down to be with her when she needed him the most since his and the Janoskians’ visas had expired; despite the fact that Ariana needed him, he was detained in Mexico attempting to re-enter the United States. Allegra Rotella is his ex-girlfriend.

They had a wonderful time together. He also tweeted a photo of himself putting a kiss on the pouting girl’s face, fueling suspicions of a possible romance. They did, however, break up. But, for the time being, he is unmarried and focused on his profession.

Jai’s physique is athletic and in good shape. He is 5 feet 8 inches tall and weighs around 72 kg. In addition, he has brown eyes and dark brown hair. There are no more specifics about his physique measurements available.

Jai has a large number of fans and is active on various social networking sites. His Instagram account now has over 901 thousand followers.

Similarly, the channel ‘TwinTalkTime‘ of the twin brothers has over 438K members. He undoubtedly makes a lot of money from his YouTube and music careers.

Their ‘Janoskians’ channel has a revenue of more than $5 million. He does, however, have a net worth of between $1 million and $5 million.