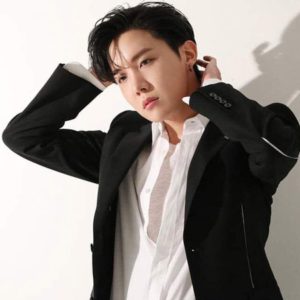 Jung Ho-Seok, better known as J-Hope, was born in Gwangju, Korea, on February 18, 1994. His zodiac sign is Aquarius, and he is 27 years old. He was raised by his parents and has an older sister, Mejiwoo, who is an Instagram star.

Before joining BTS, he was a member of the underground dance group Neuron and studied dance at Gwangju Music Academy. His dancing abilities led to an interest in singing, which led to an audition as an idol trainee.

Hobi, Sunshine, J-Dope, J-Farmer, J-Kill, Golden Hyung, Angel, Jay, Captain Nemo, JH, and many other nicknames have been given to him by his fans. He and his family currently reside in Hannam-dong, Seoul, South Korea.

He graduated from “Gwangju Global High School” and then went on to “Global Cyber University.” He was a tennis fan since he was in elementary school. He, too, participates in tournaments and once won a bronze medal in a three-team competition.

Agents from Big Hit Entertainment first contacted J-Hope in 2010 during a huge nationwide casting call. He first joined Bangtan Boys as a trainee, and then formally joined the band in June 2013 alongside Jin, Suga, RM, Jimin, V, and JungKook.

He made his debut in 2013 with the tune “No More Dream,” which was included in the Bangtan Boys’ debut album “2 Cool 4 Skool.” He went on to win a number of prizes and perform at events such as the Mnet Asian Music Awards, the American Music Awards, and Dick Clark’s New Year’s Rocking Eve with the members of BTS.

The South Korean singer debuted his solo career on December 21, 2015, with the release of his first single, “1 VERSE.” “Mama,” “Boy Meets Evil,” and “Just Dance” were his first three solo tunes. In addition, he debuted a solo career in 2018 with his debut mixtape, Hope World, becoming the group’s third member to do so.

Chicken Noodle Soup, his duet with Becky G, topped the charts all over the world in 2019. After becoming successful thanks to a social media dance competition, the song topped the Billboard World Digital Songs list and even made it into the Hot 10. In January 2020, he was upgraded to full member of the Korea Music Copyright Association, along with fellow BTS member RM.

He has won a number of local dancing awards, including first place in a national dance competition in 2008. For the weeks of March 10 and 17, he ranked third on the Emerging Artist Chart and 97th on the Artist 100 Chart, respectively, thanks to the success of his solo debut.

On any social media platform, he never mentioned having someone he cared about. He should most likely be single and concentrating on his profession.

With a height of 5 feet 10 inches and a weight of 65 kilograms, he has an excellent body structure. Sprite is his favourite drink and his favourite hair colour is red. He claimed to be one of the members who is a good cook. Mang, his BT21 persona, might be a blue/purple horse.

J-Hope used to teach Literature in BTS’s mini-drama ‘Flower Boys.’ He enjoys literature and reading. He admits that he isn’t very adept at drawing. Green is his favourite colour. He can communicate in Japanese, Korean, and a basic Sunshine dialect.

His net worth is estimated to be around $12 million, according to Celebrity Net Worth. In 2016, he bought a $1.6 million luxury condominium in South Korea for his personal usage.